Utilizing the “TinyWars” brand, we developed a fun card game that fits within its own theme from the menu system all the way to the collecting mechanics.

Developed virtual currency reward system to make the gameplay fun and replayable for the player.

Implemented Mobile AdMob advertising so the game can remain free to play with a monetized strategy.

Responding to crashes, review suggestions, or user input to develop and update the game actively. 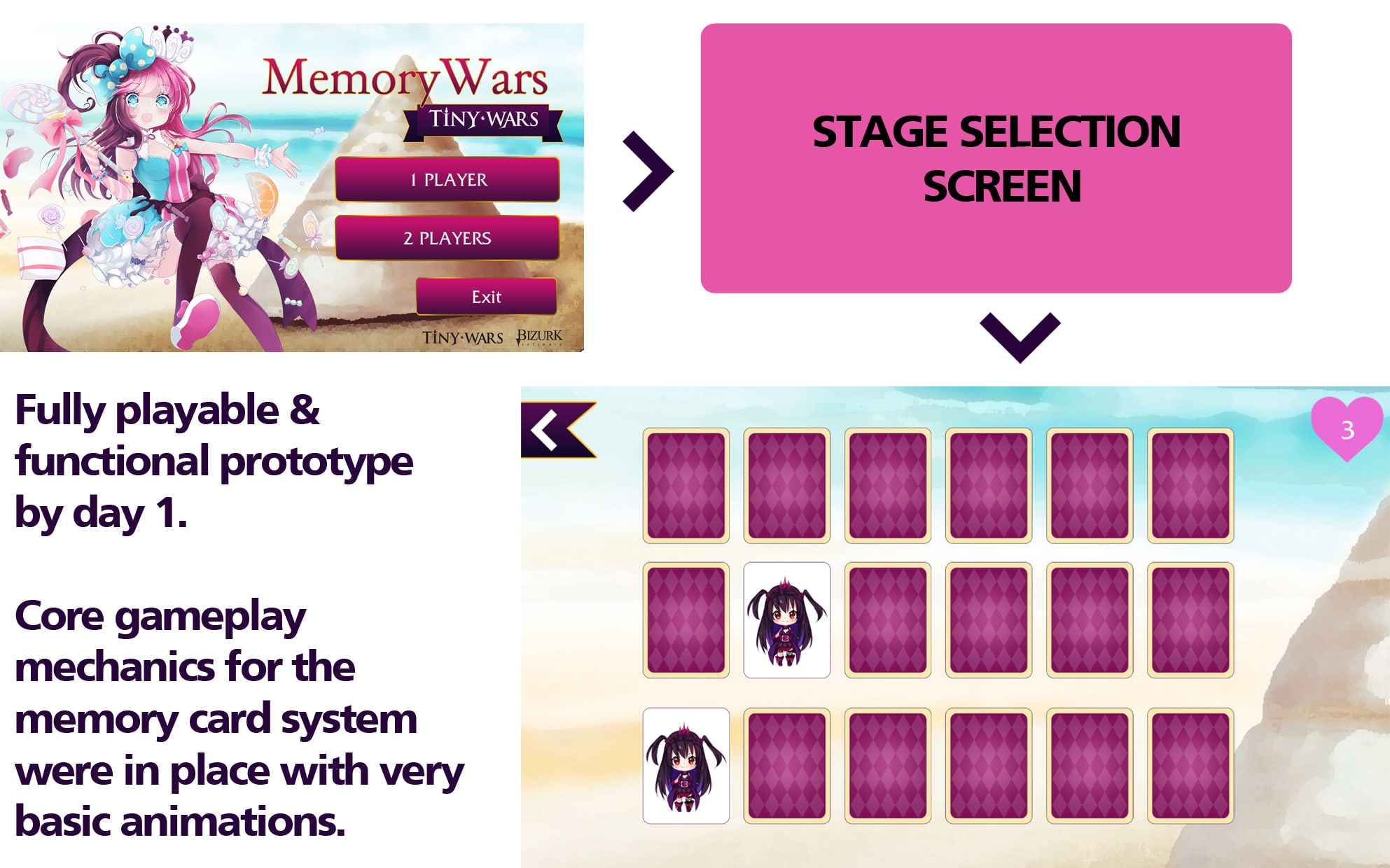 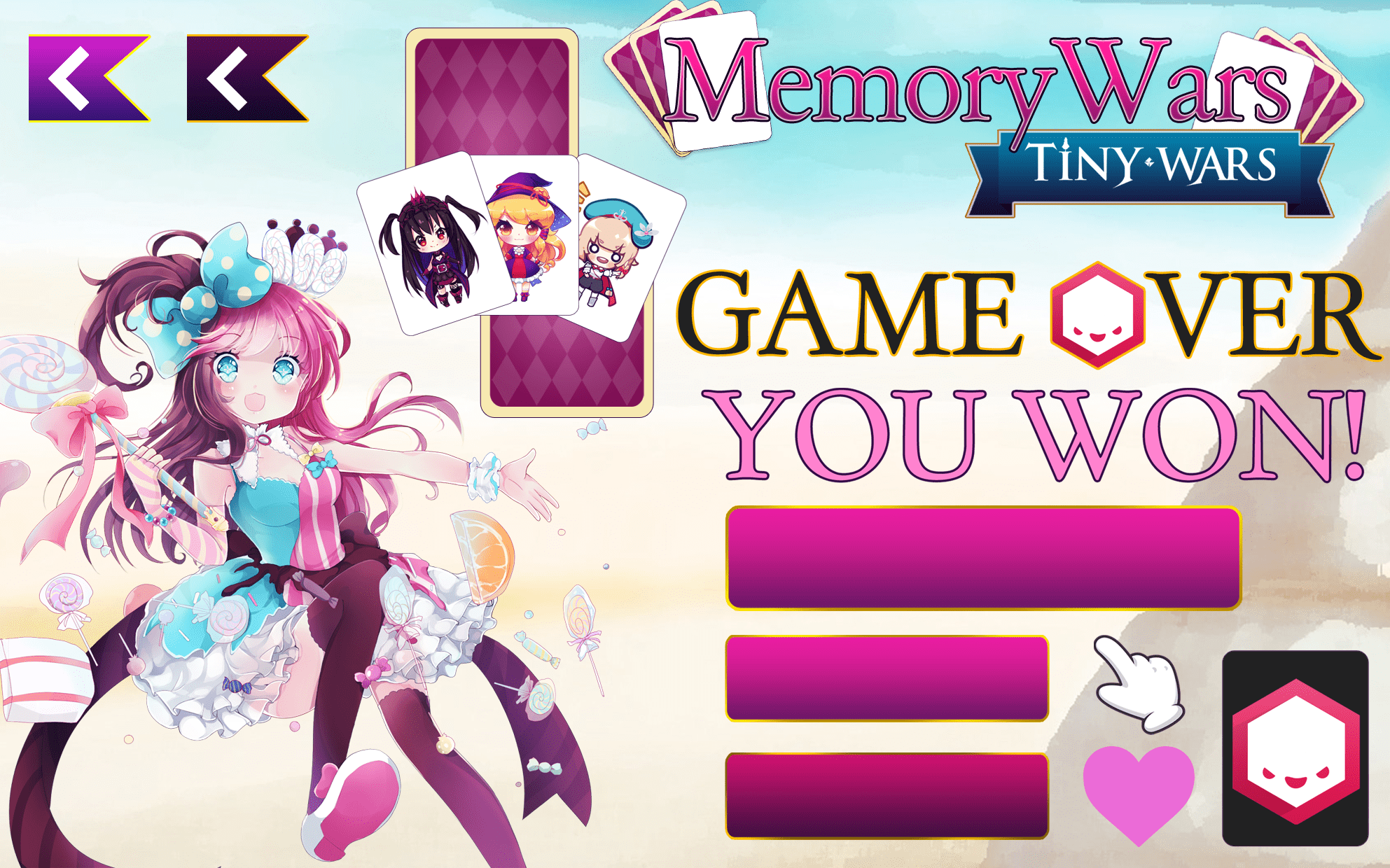 By the end of the first day we had a fully functional prototype which featured all the core memory card mechanics working properly. This included:

At this point in the development, the core gameplay mechanics for the “Memory Game” system were fully in place. Elements such as virtual currency, collecting, A.I., were not introduced until Phase 1.

The first 4 bullet points (previously listed) are self explanatory, however the “Life System” and “Bomb Card” need to be further explained. The Life system is seen in the screenshot as a pink heart with the number “3” inside of it. If a player loses all their lives, then it’s game over!

The “Bomb Card” is the device in which lives can be deduced from the player. If at any point the player flips over a “Bomb Card,” if the player does NOT get a matching card, then they will loose 1 life. This only happens when the “Bomb Card” is flipped face up. This adds a unique element and challenge to an otherwise basic game of memory.

The classic game of “memory” is based around a few friends playing together,  likewise we knew that this game needed a multiplayer feature. What happens when you and a friend have nothing to do? Bust out a deck of cards!

Only this time you can play memory without the cleanup!

The 2 player feature was a simple modification of the point keeping system. At this point, the game is now keeping track of variables for both player 1 and player 2.

The variables that are being recorded:

Whenever a mismatch is made, the current turn will switch to the next player. 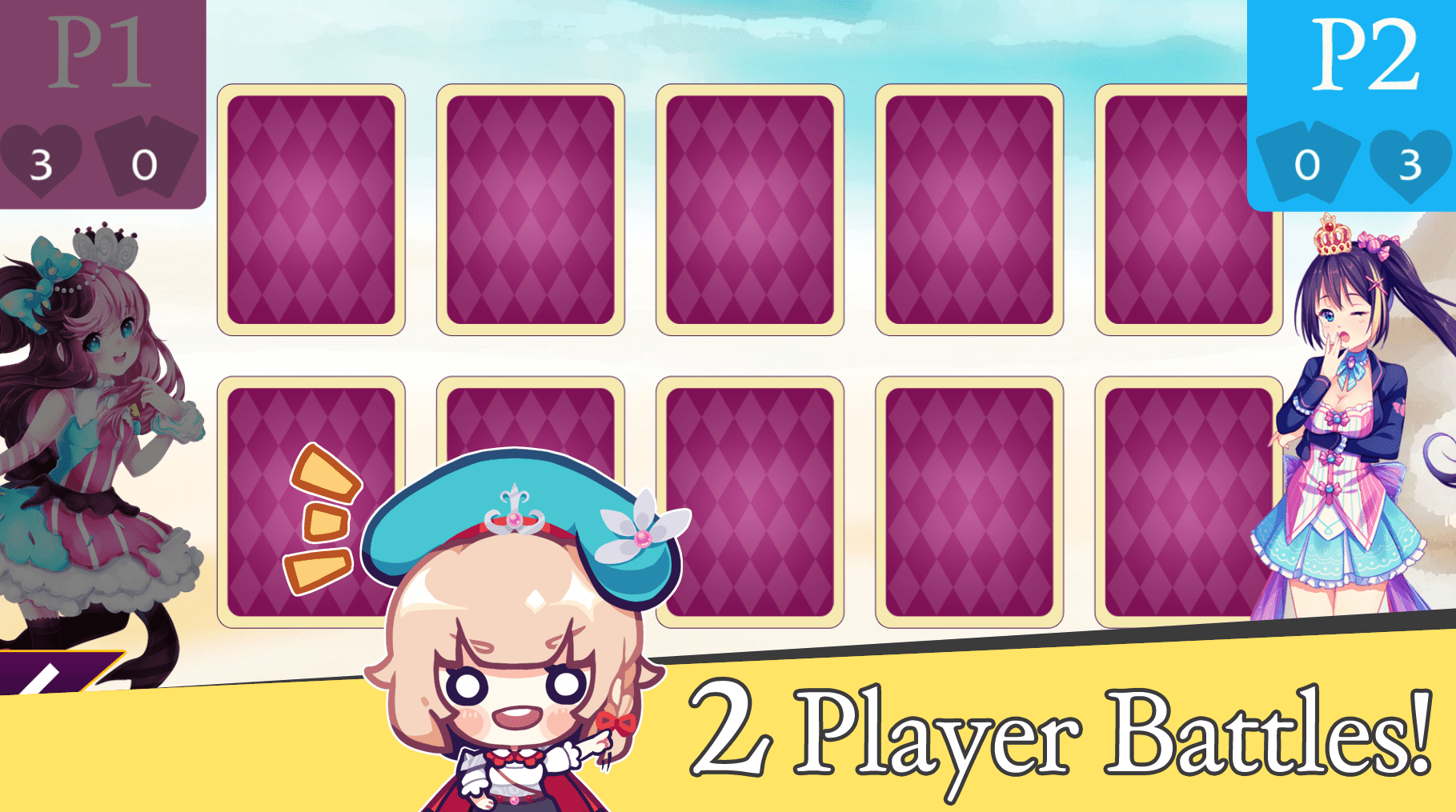 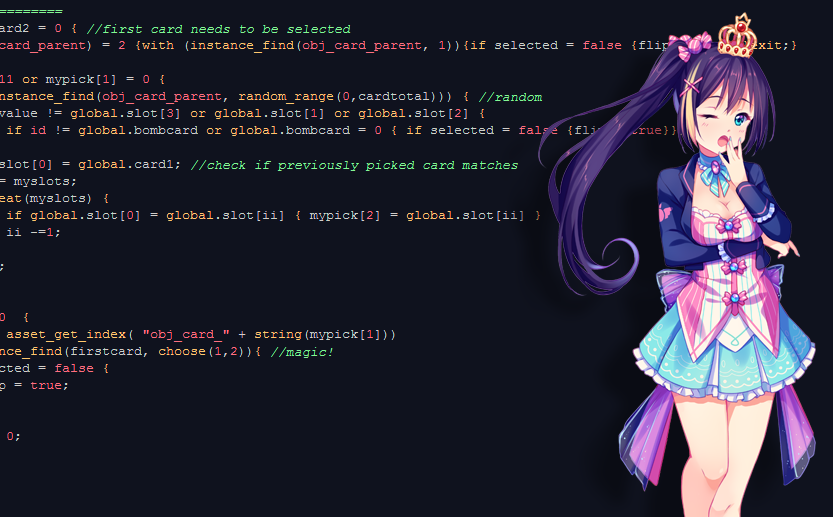 We utilized a series of “repeat(i)” and “exit;” statements in order to both check and flush the A.I.’s memory under certain circumstances.

There were times when a player might not be able to play with another human and so the A.I. feature was a perfect solution to this problem. In essence, the A.I. allowed us to generate unique, repeatable content for the player.

Hopefully, every interaction with the A.I. should be a unique experience on its own.

The A.I. also sets the foundation for the future content of the project which allowed us to generate many new levels for the game without actually generating any significant new content. Some new content does appear in the new levels, however the addition of the A.I. and victory rewards will allow the user to propel themselves through the game without worry of repetitive gameplay or boredom. 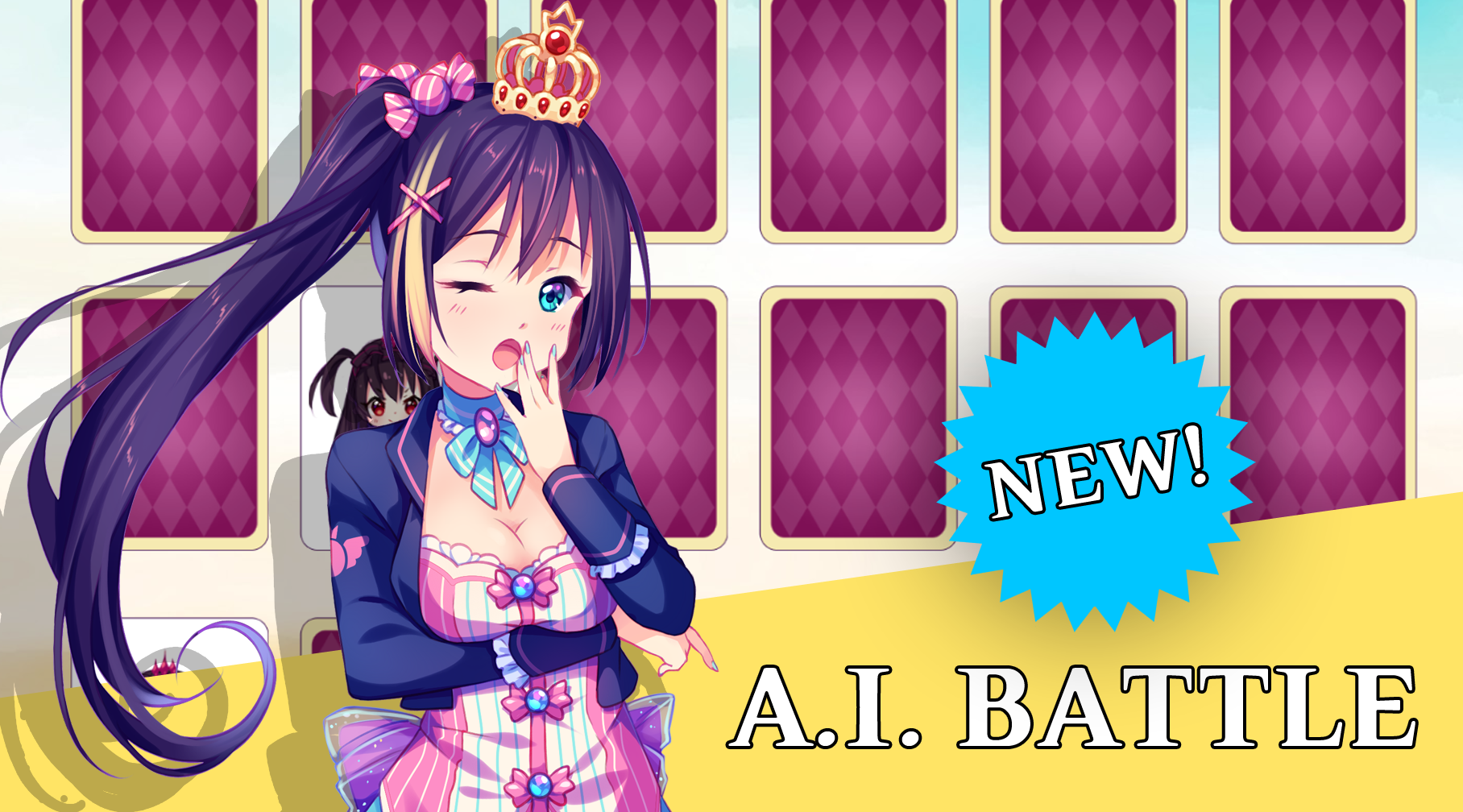 This screenshot (pictured) depicts the single player menu of the game. Immediately upon being presented with this menu, there are several cues that should fill the player’s mind:

The “New” that appears above the most recent level is also a cue that this is a level that has not been beat yet.

Progressing through the levels and slowly revealing each card is a reward in itself.

Even with a progression system in place, there still needed to be more incentive for the player to continue playing the game. The virtual currency system fixes this problem by adding another dimension to the progression.

Players are not only progressing through levels, but also progressing by collecting virtual currency, regardless of whether they win or lose. They will also be rewarded for winning.

Some levels in this game are intentionally made nearly impossible, in order to increase playtime, and the challenge of the game. The virtual currency (as we will outline in the next phase) can be used to purchase items which can aide the player in beating these difficult levels. 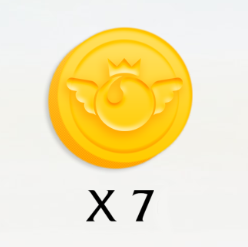 The Virtual Currency Unit of this game

What’s the point of a virtual currency system if there is nothing to spend it on? The collecting mechanic utilizes the virtual currency feature by adding another dynamic to the progression of the game.

The player can utilize the virtual currency to collect “collectible cards.” The collection is complete when the player collects all the cards at least 1 time.

We’ve also added a “collection room” which shows the player how many cards they have collected relative to the full collection. 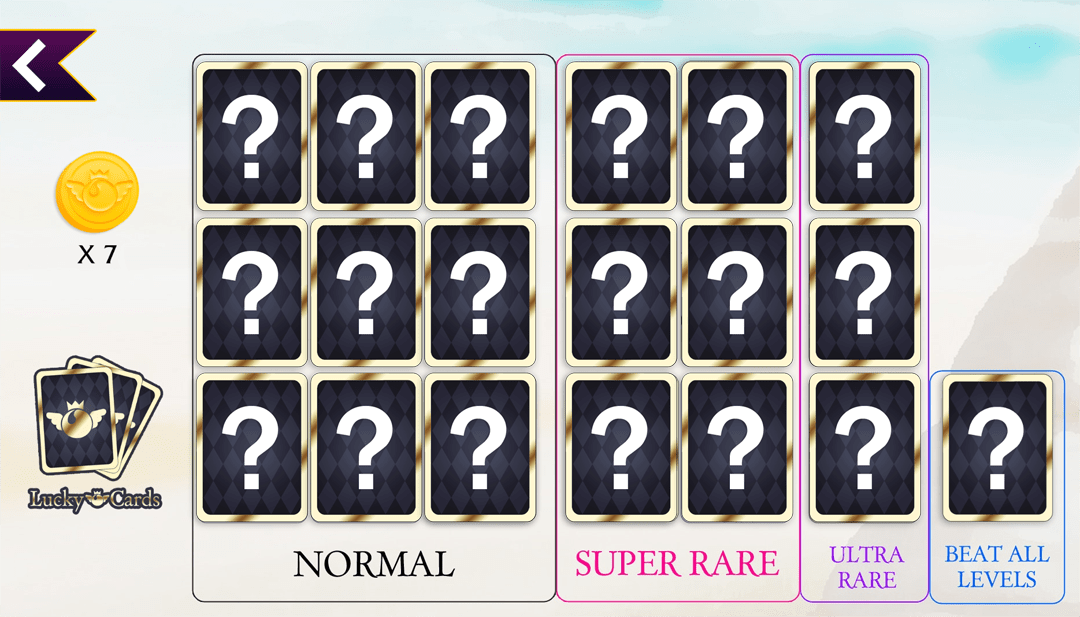 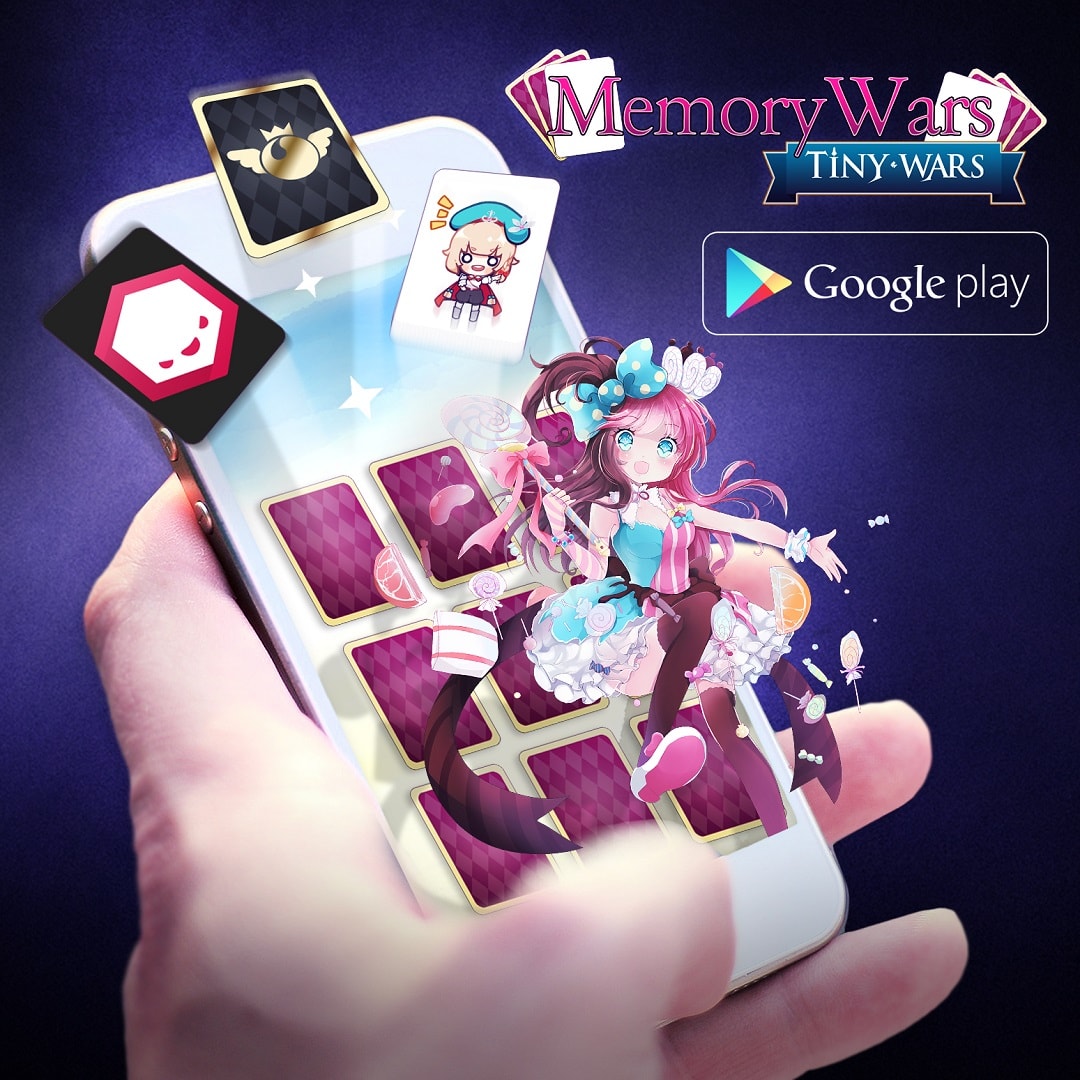 Fun is a Priority!

The collection page improves the replay-ability of the game by adding another dimension to the progression.

All of these features: A.I., Virtual Currency, Collection, Progression help to increase the replay-ability of the game. Not only does this allow the game to be genuinely fun and rewarding for the player, but it also increases playtime which in turn, increased advertisement loads.

For a game that is FREE to download and play, increasing playtime and fun is a top priority.

Through the use of psychologically rewarding mechanics and a memory challenging classic, we hope we have delivered upon a fun and interesting game that players around the world will enjoy!

This game has been released and is available for both tablet and phones via GooglePlay.

IMPROVE YOUR MEMORY AND COLLECT SOME CARDS!

CHECK OUT THE REST OF OUR BEST PROJECTS!